Meet the Breed: The Siamese

The Siamese cat is one of the most popular shorthaired breeds in America. The breed originated in Thailand (formerly known as Siam) where they were called “Moon Diamond.” They were first brought to the United States in 1878 as a gift to President Hayes and later to the United Kingdom in 1884. Their unique appearance including a sleek body, blue eyes, and pointed color patterns intrigued cat fanciers in the West.

The most  famous Siamese cats are probably the mischievous Si and Am from the Disney movie “Lady & the Tramp.”

The original imports had a sturdy muscular body with a wedge-shaped head. As fanciers began to desire a more slender look, they bred for longer bodied individuals with triangular-shaped heads and large ears which resulted in the modern type. What catches most people’s eyes are the are the large almond-shaped blue eyes. While the majority of Siamese cats are the modern type, there are breeders who continue to preserve the traditional type.

The distinctive pointed pattern is a form of partial albinism that is caused by a mutation in an enzyme involved in melanin production. The mutated enzyme is heat-sensitive and is inactive at normal body temperatures and is activated by the cooler temperatures of extremities and face, which results in the darker coloration of those areas. When kittens are born, they are pure white and individuals will darken as the age. The most common color pattern is seal point but other color patterns include lilac point, chocolate point, and blue point. 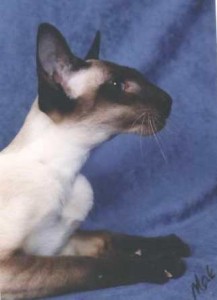 Siamese are generally a healthy breed and can live long lives but can be predisposed to certain medical problems including  gastrointestinal issues, amyloidosis (an abnormal production and accumulation of the protein, amyloid in multiple body organs), and behavioral problems such as pica. 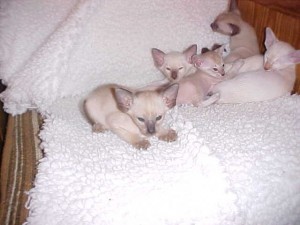 Siamese cats are a very affectionate and social breed with a curious nature. This breed is also extremely vocal and will let you know when you aren’t paying enough attention to them using their voices. Siamese are intelligent; learning tricks like fetch come easily to the breed. They have high energy levels, do not tolerate isolation well and love the company of their humans.